written by
B Adair

How to Support Your (and others’) LGBTQ2S+ Kids

...because LGBTQ2S+ kids do exist.

Statistically, you know children who will become part of the queer community. Many adults tell us that they knew as kids that they were gay or transgender. In fact, as it becomes safer and safer to come out, people are doing it earlier. That’s why it’s so important to teach about inclusion, diversity, and Pride early on. You probably already know some LGBTQ2S+ kids without realizing it.

That isn’t to say that every little boy who clomps around in mommy’s high heels is really a trans girl, or every little girl who likes baseball will grow up to date girls. Kids experiment with all kinds of clothes, characters, and activities, and that’s all perfectly developmentally appropriate. Believe it or not, there are straight boys interested in musical theatre and cisgender kids who play lots of dress-up. Those kids also need to hear that whatever they’re interested in, you’re excited for them, whether it’s a phase or not.

What the LGBTQ2S+ kids, specifically, in your life need to know from you is that if there does come a moment where they’re sitting in front of you getting ready to come out, terrified that it will change everything, you will always love and support them. The best way to make sure they know that is to tell them early and often that you love them for who they are inside, no matter what they do. A parent’s love should be unconditional. And this should inform your interactions with the other children in your life, as well--there are plenty of kids who don’t have anyone safe to come out to, and if you can be that person it’s an honour.

...even though it’s complicated

I’ve used both the terms LGBTQ2S+ and “queer” in this article so far, and that doesn’t begin to cover all the possibilities. Your child may come to you one day asking for you to refer to her with they/them pronouns. Huh? How? What does that even mean?

We all use pronouns. “We” is a pronoun. If someone asks you to use different pronouns for them than you normally do, go ahead and give it a try. I guarantee it will make them feel relieved that you support them and grateful that you didn’t try to talk them out of it. Guess what? I just used they/them pronouns for the hypothetical person in this whole paragraph. Yup, it’s that simple!

So wait, would that mean I have a gay kid? Well… not necessarily. Gender and sexuality are two completely different things. Often, people who use they/them pronouns are nonbinary, which is a way of looking at gender outside of the traditional male/female paradigm. Many nonbinary people feel included under the umbrella term “transgender,” but not all.

And not all transgender people are gay! For example, if your child was assigned female at birth but comes out to you as a trans boy later in life, he may be attracted to and date girls. In that case, he’s straight (unless he also likes boys, in which case he might be more comfortable identifying as bisexual or pansexual)... phew, is there a dictionary for all of this?

Luckily, there is, and it’s called elder queer folks. We’ve been through all of this and many of us are happy to help you and your LGBTQ2S+ kids through anything you’re worried about. I’m generally an open book.

However, I’d recommend Googling first, specifically for firsthand sources written by gay and trans people who’ve already done the work and will benefit from you buying their books or reading their articles. Most of us don’t really appreciate being stopped in the street and asked about our childhoods; I mean, would you?

...but my toddler isn’t gay

Well, your toddler doesn’t have a sexuality yet, and that’s fair--although I’ve seen my fair share of “ladies’ man” and “Mrs. Bieber” onesies. We talk all the time about their little girlfriends and boyfriends without thinking much of it. Weird, right? They’re babies. We have no idea who they’ll end up dating when they’re ready, if they’re into dating at all.

When he’s older, though, I’m sure you intend on having The Talk with him, right? I bet you’ll stress respecting women and being a gentleman, right? See, you’re already thinking of these things, because you’re a great parent. And that’s the typical sort of talk you’ll expect to have with a boy, because statistically, most boys date girls… except, yours might be pansexual, demisexual, asexual, or identify as something completely different in the years that go by between now and when he’s ready.

Or maybe his best friend will be, and his parents will kick him out. That kid’s going to need to hear some love. Which means that all of this learning is still worth it even if your kid turns out to be straight and cisgender the whole time, because he’ll know how to treat his friends when they need compassion.

Those are a lot of words and some of them are brand new, so let’s have a quick rundown:

Pansexuals are attracted to the person, not the gender. Boy, girl, nonbinary person, they’re all good as long as they’re kind and funny. Pan means “all.”

Demi means “half,” or in this case, “sort of.” Demisexuals are people who can be attracted to someone as long as they know the person really well--they don’t get crushes on celebrities or date someone just to see if they’re compatible. It might take them longer to find someone they’re really comfortable with, and that’s okay.

Asexuals may or may not ever be comfortable dating; they don’t always experience attraction in a sexual sense but might still love romance and affection. (If they don’t, that’s called “aromantic,” and that’s valid too.)

To make this even more complicated, the dictionary is constantly being updated and new identities are coming to the forefront. You might hear things like, “Back in my day, we didn’t have all these different labels.” That’s true; we didn’t. People who didn’t fit into the two binary genders were forced to act like one or the other. Trans people were literally arrested for wearing “the wrong clothes” at the Stonewall Riot, the historic reason Pride parades exist. Asexual and aromantic people were and still are pressured into relationships, and sometimes sex they don’t want. I’m sure that’s the last thing you want for your kiddo when they grow up.

So how do you make sure that you’re ready for the person your child grows up to be? Tell them now. I don’t mean “sit your two-year-old down and ask them which pronouns they want,” although that’s cool if you want to try it. I mean say things, repeatedly, like “I love you no matter what.”

Gay and trans family friends are totally appropriate to introduce to your kiddo at any age--there’s nothing “inappropriate” about two men holding hands, just like it’s not inappropriate for straight couples to do so. Let your kids know that any kind of love they find in their life is a love you’ll celebrate. “Why is that man wearing a skirt?” your curious child might ask. “There might be a lot of reasons, including that skirts are twirly and pretty!” If he wants to paint his nails, let him know you’ve got his back against the bullies. If she wants to go by “Theodore,” let her teacher know she’s trying out a cool new name, and ask her which pronouns she’d like to go with it.

Just like anything else, your kid is going to grow up into exactly who they’re meant to be, and all you can do is love them for who they are. If you know how to do that, you’ve already nailed it.

After coming out as gay & trans in a rural/conservative farming community in East Central Alberta, B Adair (he/him) now facilitates community conversations to increase knowledge and improve diversity and inclusion practices with educators, business owners, healthcare practitioners, students, and community organizations to bridge gaps and eliminate stereotypes and stigma.

A former paramedic, B is an accomplished speaker, educator, and facilitator and his company, Just B Diversity & Inclusion Consulting is well known for providing safe and non-judgmental spaces for groups of all kinds to learn and ask questions comfortably. B uses his life experiences, sense of humour, and passion for advocacy to connect with people from all different backgrounds.

In his spare time, B loves spending time gardening, camping, hiking, and anything else in the fresh air. B is happily married to his partner Alix and together they have a family (i.e. zoo) of foster fail cats, an assortment of aquatic creatures, a rambunctious mutt named Lola, and her little brother (rescue puppy) named Maskwa.

Lisa Sierra
Parenting 4 min read
Shopping for a Stroller? These are the Top 3 Must-Have Features 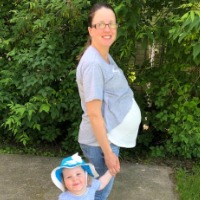